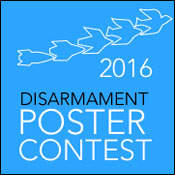 International Deadline: January 24, 2016 – In commemoration of the 70th anniversary of the first UN General Assembly resolution, which established the goal of eliminating nuclear weapons and all weapons of mass destruction, the United Nations Office for Disarmament Affairs is pleased to sponsor the UN Poster for Peace Contest.

Since its establishment, the United Nations has been seeking to eliminate all weapons of mass destruction, especially the deadliest and most indiscriminate – nuclear weapons. Nearly 70 years ago, the UN General Assembly’s first resolution, adopted on 24 January 1946, established the goal of eliminating all nuclear weapons and other weapons “adaptable to mass destruction”.

Nuclear weapons remain an apocalyptic threat. The Secretary-General of the United Nations continues to use every opportunity to raise global awareness as to the dangers and true costs of nuclear weapons and other weapons of mass destruction.

Many believe that the humanitarian consequences from the use of nuclear weapons is reason enough to abolish them.

In recognition of the 70th anniversary of the adoption of the first resolution of the UN General Assembly, the United Nations Office for Disarmament Affairs has launched a UN Poster for Peace Contest. The contest aims to raise awareness on the need for nuclear disarmament, to promote the work of the United Nations and its disarmament efforts, and to inspire citizens across the globe to add their voices, and use their artistic talents, in working for a world free of nuclear weapons.

AWARDS
There will be three winners:

WHO CAN ENTER
Anyone of any age can enter this contest, and it is open to all people in all countries. Children below the age of 13 will need to have their parents’ permission, and will need to have parents (or a legal guardian) help with their submissions.

SPECIFICATIONS
Art work must be original, submitted by the artist. It should be developed such that it could be displayed in a 60 by 90 centimetres (2 feet x 3 feet) format.

As all art work must be fully original, no entries will be accepted or considered if they are deemed to use in whole or part derivative images which could be considered plagiaristic.

Entries should be uploaded to the 2016 Disarmament Poster Contest website.

JUDGING
All entries will be judged using the same criteria: creativity, composition, theme and technique. The winners will be announced on 5 March 2016.

COPYRIGHT
Those making submissions agree that the UN retains all copyrights of the materials submitted. Files uploaded to the contest website should be solely images of the artwork and not contain photographic images of the contestant nor other individuals.

CONDITIONS
The UN shall not be responsible for any loss or damage that may occur by entering this contest and the UN reserves the right to make changes to the rules of the contest without prior notification.

Entries should be uploaded to the 2016 Disarmament Poster Contest website.