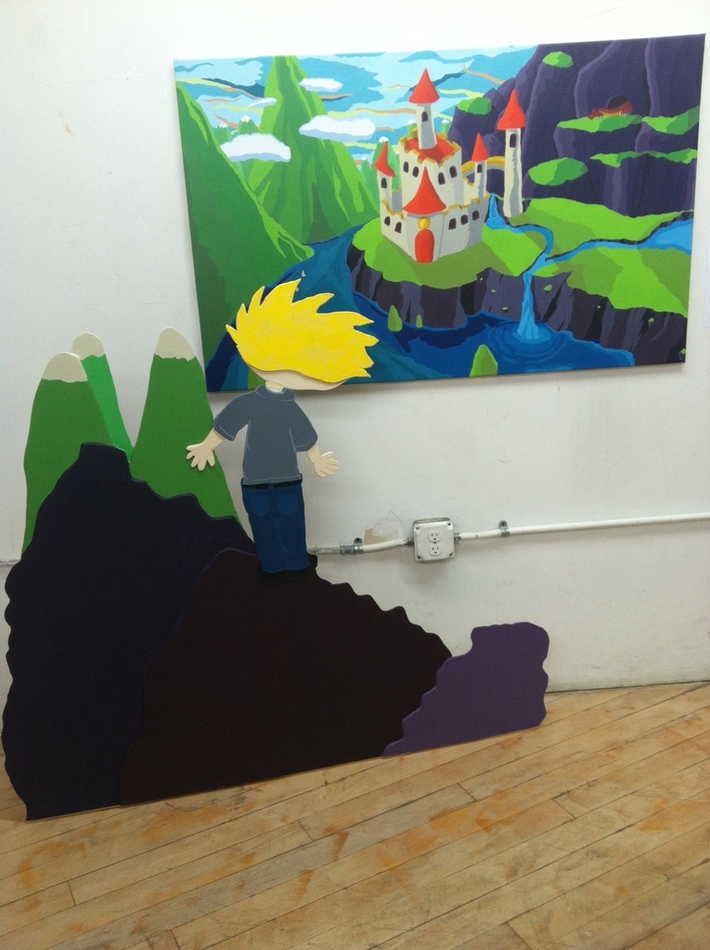 Chapter One
The Adventures Begin


Dusty Gray was a boy of thirteen with sky blue eyes and messy blonde hair. Like any other boy his age, it was school by day, video games and friends in the afternoons, and to bed at the same time every night. Yet there was one difference between young dusty and the other kids his age. Dusty always had a love for fantasy, watching Lord of the Rings and cartoons such as Adventure Time all the while wishing with all his heart to be in one of those fantasy worlds. He longed to leave his boring life of a normal kid behind to go on adventures to meet elves and dwarves, fight dragons and ogres. He would wish at every opportunity, every birthday, shooting star, eyelash, but every time he went to sleep he awoke day after day in the same world with the same routine. After a long time he began to lose hope that he would ever find the adventure world he craved, but that didn’t stop him from wishing time and time again. Until one night before bed, “Dusty” mom called down the stairs, asking him to let the family dog in from the yard. Dusty opened the door an called for the dog, but the dog wouldn’t come, so he walked out into the yard. “Maybe the dog is chasing that raccoon again”, Dusty thought to himself. As he walked toward the back fence he stopped and stared up at the sky. Suddenly a star shot across the horizon, so he closed his eyes and wished for that which he longed for most. When he opened his eyes, he was still standing in his own backyard with the dog jumping on his leg. So he sadly went back inside, locked the door and went up to bed. As he drifted to sleep, he prepared himself for another boring day in his mediocre life.

Dusty woke the next morning groggy, as he opened his eyes he slowly began to realized something was off. It was much brighter than normal in his room, almost blinding at first, then his eyes started to adjust. The first thing he saw as he laid there looking up, were tree tops above him. Then he began to realize that he was no longer in his bed at all. Whatever he was laying on was much too hard to be his bed, he suddenly realized it was the ground beneath him! Dusty immediately popped up, eyes wide open, he was in the middle of a meadow surrounded by trees with the sun shining hot upon his face. When he finally looked down, he was surprised to see that he was wearing his favorite gray shirt and a pair of blue jeans, along with his black sneakers. It didn’t make any sense! Thinking back, he went to bed last night in his pajamas, how did he get in these cloths? He knew he must be dreaming and pinched himself, but all it did was hurt his arm and leave a nice red mark in its place. This wasn’t a dream at all... he was somewhere he's never been before, and all alone. He got up off the ground and began to walk, figuring he would find someone eventually, a roadway, or some resemblance of the world he knew. He continued to walk and walk, only to find nothing of that place. All he saw was was dirt and tress, and lots of strange woodland creatures that hes never seen before. It all seemed very chaotic, everything much more active and vibrant than anything he had ever experienced. These were not like the woods back home, as he continued to walk he saw a clearing in the distance, so he picked up the pace and began to run. Eventually he was sprinting as fast as he could, but when he came through the trees he halted in terror. Toes over the edge, Dusty almost fell off of a tall narrow cliff. When he finally caught his breath and lifted his head, what he saw was every bit of the fantasy world that he had always imaged...and so the Adventures of Dusty Gray had begun.

Thank you very much for asking me to comment on your work.  The multi-faceted Adventures of Dusty Gray appears complex in its visual bridge between flat animation and physically dimensionally constructed parts. The picture of this rather large installation is particularly intriguing; I imagine the scale impacts the environmental viewing.  The boy character and accompanying story suggest an amalgamation of fantasy and the classic fairy tale genre.  I also find the perspective interesting and unusual, as the character’s back is to the viewer, while we look up and over him into a window oriented landscape with requisite castle.  While physically close, the jump between media deliverers an insurmountable barrier, both physically and psychologically. It is this disparate pairing that holds my attention. I imagine the written narrative contributes to the overall viewing, but I personally like seeing the images separately.  Why directly illustrate what’s in the story?  Instead, the images can transmit what can’t be communicated verbally.  But perhaps this is just my aesthetic bias.  The small grouping of Techline Conversations to my eye appear more original, if not visually curious.  The elevated characters are absurdly funny- playing with the limits of anticipated scale and physical instability.  Bright color functions as another punctuation of space, highlighting various relationships and missed connections.