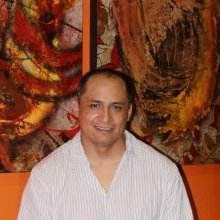 Transposing visceral emanations into color values and textural forms, JORGE ARCOS’ highly personalized abstract paintings reflect an electrifying intensity as he extracts the repressed and the invisible, inviting the viewer to contemplate some inscrutable facet of our world.

Wassily Kandinsky once mused, 'there is no 'must' in art because art is free'. An artist of dynamic contrasts and exceptional vision, painter Jorge Arcos demonstrates this inherent freedom art sustains in his brilliant series. In Mr. Arcos' work, one witnesses the pinnacle of what makes for successful abstraction. Mr. Arcos is extraordinarily adept at intricate application of paint and color pattering. The palette of Mr. Arcos' series cannot be overemphasized. It is expressive to the highest degree and effectively communicates a mood to the viewer without need of direct scene or representation. Transcending everyday reality, Mr. Arcos is an artistic intermediary whose canvases conjure vibrant spectrums of human emotions.

Born in 1969, in Mexico City. He intruded in the art in a lyrical and incidental way
when he was a little boy, in the year of 1974, working with drawings. As a young
boy he received direct artistic influence from his father who was a Landscaping
painter at that time. Jorge regarded art as a part of himself during his childhood and adolescence. Later on he perfected his technique by taking drawing classes, painting, history of the art, human body drawing, art object, engraving, mixed media and abstraction. He decides to pursue a career in “Drawing and Illustration” in Mexico City and later on he move to Atlanta, Georgia where he focuses on Abstract Art. In each new work, Jorge looks out from within as he explores issues of outer and inner development. Currently his work is focused on his never-ending obsession with abstract painting.

"My art is an expression overflowing, of how I perceive the world. The pallet is usually colorful and uncontrollable ways that are merged into an uncontrollable world of organic forms. Thanks to my Hispanic heritage, coming from a country fully rooted in its cultural roots, my work shows lively and energetic, strong and obsessive. Looking at a world full of nuances and changes, my focus is the interior, which goes unnoticed, what has been forgotten. Trough a journey of learning path, my work conveys self-discovery and evolution, communicating to the viewer, my viewing and perception of the world around me, quieting the mind and carrying my ideals trough colors and shapes, eluding to conformity and traditionalism".