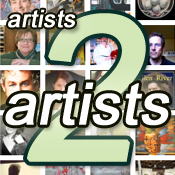 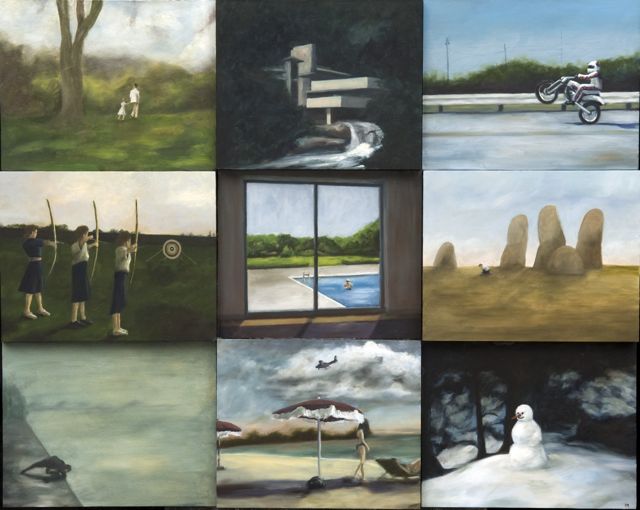 The title of the work alone- Venus, Cupid, Time and Folly says a mouthful, and is in itself a work of poetry and art. The multi-image composite is intriguing as at first sense I tried to comprehend a linear narrative. Then, it seemed to capture everything in between the anticipated story. Iconic American or athletic characters carouse in sport and at play, while some simply seem lost in the moment or mood.  The formal organization between cool blue and warmer brown horizontally running bands plays into the idea of a parallel story, each moving through earth and water elements without a certain destination.   The scale of this work is also interesting.  When I first saw a thumbnail of the painting, I assumed it was a photo collage, but I question if that reference is present in the physical, tangible piece due to its large scale and oil medium.  Nonetheless, the idea of the frozen moment- the snapshot-prevails.  I’m also very attracted to the piece Lost and Found (003).  A decided quieter space exists in this work due to the larger blocks of repeated vignettes.  The local color variation within each of the individual sections seems to assist in the smooth representation, and suspension of time. The trio of archers drawing their bows appears symbolic and picturesque, but very faintly foreboding.  The same could be said with the swimming figures reaching out towards the edge of land or the pool. Each frame depicts a melancholy mood, of questionable loneliness, sadness or just ennui. I’m not sure what they all mean collectively, but I’m drawn into their space, tensely waiting for the next moment, which I realize will never come. Falling Water and the motorcyclist popping a wheelie in the top row are the peculiar outliers, but conform to a certain degree as single figures drawing our awed attention with their gravity defying feats.

2021 On the Edge Exhibition

2020 Vision: Seeing Ourselves Through Challenging Times