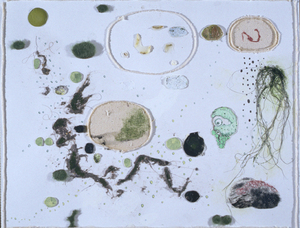 As most of you already know I love a good studio visit, and doing ChicagoArts allows me to visit some of the
most interesting studios in the area. I recently met with Paul Nudd who many of you may already be familiar with, due to his prolific showings over the past few years.


Paul is a drawer, he also paints and makes collages, but all of those still can easily be described as drawing because of how they are constructed. I mention that because I think it is rare for and artist to entrench themselves so deeply into drawing. Usually you would see a natural move into the realm of etching, but Paul's work stands alone so successfully as drawing, there in absolutely no reason to make that step.


While talking to Paul I found out he became attracted to drawing in Middle School where he was, as you might of guessed, the funnyman; probably because he was also the drawer of all things subversive. Having been a boy in the 8th grade myself, I am sure I would have gotten quite a kick out of seeing drawings of anything considered inappropriate. 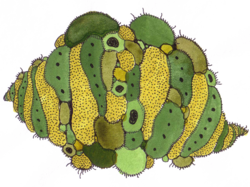 Paul was influenced by the 80's in a very profound way, this has since became the basis of a lot of his work. From the Garbage Pail Kids and Wacky Packages to Horror movies and all the bubbling gooey gross of that decade, Paul is nostalgic about it
all. It is no surprise then to find out that he makes work every day, and although he may not complete a piece every day, he is working in this ephemeral tradition that was spawned in the 80's, mainly through advertisements to children. Paul is embracing his experience, exposing the world, not only drawings of Tropical Turds, but to the hair in his shower drain, all of which, in the 1980s, would have been treasures to kids all cross the United States.


Paul's work rides the line of familiar vs. foreign and is done so honestly that it is easy to enjoy his work, luckily there is a lot of it out there to enjoy.