California-based Tim Shockley is a conceptual artist whose works reflect both a sincere devotion and respect towards his signature material, bronze, as well as the memorializing of time in its fleeting impermanence and perpetual relevance to our lives.

Tim’s years of work in a foundry have formed a meticulous craft while his roots, cemented by the sprawling and arid Coachella Valley desert, have provided an endless source of inspiration through the organic elements found within natural spaces.

Each new piece or series comes to life through a process combining the creative spark with meticulous forethought, and followed through to the final compilation of material and individual voice, resulting in sculptures, assemblages, and installations whereupon one perceives a glimpse of a fleeting moment in time, forever captured and made monumental through its presence as a work of art.

Shockley’s creative process thus becomes a rollercoaster upon which the initial conceptual seed is applied within the intense foundry setting; the physical work involved becoming a metaphor for the birthing process, while the end result cemented in its strong, immortal form becomes an icon to frozen time—the introduction of a monument presented to the communal psyche.

As a teenager, Shockley’s viewing of Picasso’s Bull’s Head sculpture—which consisted of a banana-style bicycle seat and handlebars mounted to a wall—helped form his inner rebellious streak; motivating him to see things in a different light and igniting his drive towards an unconventional presentation that now weaves a common theme through his work. This can be seen in his construction of silk ties, lying languidly on a table as if made of light contours, only to be rendered as sturdy, heavy objects when one realizes the fabric is really bronze.

Themes in his work range from the eclectic homage to the enigma of time.

In his series Small Reminder, fragile-shelled snails adhere to life’s everyday objects like the snails that used to proliferate his grandfather’s yard in the days when time passed slow and steadily.

In his Tempus Fugit series, everyday objects become icons of expressing the old and the new within our lives, spurring a frozen moment in which both become the same, punctuating the presence of time as a perpetual caption to our lives. One work in this series that conveys this core concept exquisitely is the stately wood column reminiscent of a grandfather clock with a fossil elevated to icon status embedded where the face should be, accentuated by light. This view to the past becomes somebody’s piece of beauty within the present.

In Sign of the Times, Tim combines a series of bronze frames that are all haphazardly broken along their perimeters and dangling precariously upon the walls with small androgynous stick figures reminiscent of marionettes, which crawl up and cling to the edges of these structures. The tension produced upon viewing causes us to reflect on the impermanence of life, man’s daily crawl up and towards some beacon in the future, and the inevitable decay and erosion of things.

His recent Loose Ties series reinstates the subtle sense of humor that underlies all of Tim’s work. Conceptualizing a series of men’s ties that stand animated in serpentine poses, Tim strove to create the illusion of dual identity in these sculptures which tweak the mind; taking the viewer out of their comfort zone momentarily until they realize they are looking at something ordinary in an extraordinary new perspective—opening the viewer’s eye to new perspectives being a lifelong impetus in the artist’s overall oeuvre.

I will be showing four new pieces from my 'Sign of the Times' series next week at SOFA CHICAGO at the Navy Pier.  I will be represented by Maria Elena Kravetz Gallery, Cordoba, Argentina (booth 900).… 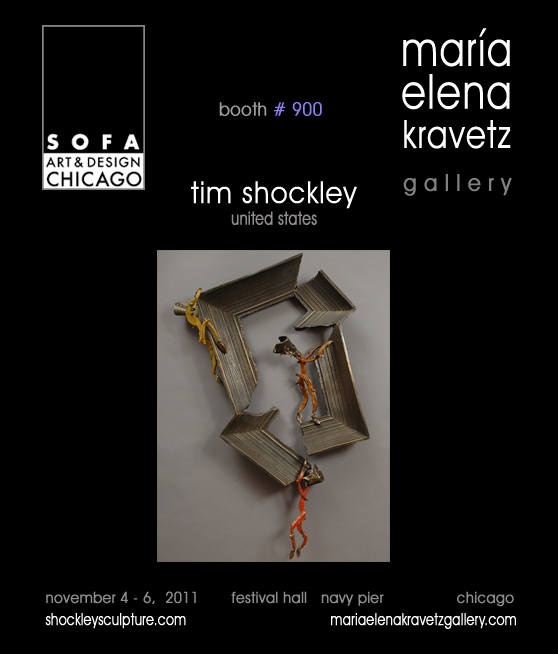