I Find the works by this artist fascinating from both a technical and symbolic perspective. A short piece on his methods can be found at http://webartacademy.com/odd-nerdrums-painting-method I have entered three paintings in The American Art Awards. One was the painting in my previous post here, … For my first entry on the Artists2artists blog, I would like to feature a painting that was completed over many months. The earlier paintings in this series were more realistic in the interpretation of the clock gears, but ended up being somewhat monochromatic. I purposefully decided to forgo the… Apex Art announces the winners of it's 2012-13 Franchise Program. We received 182 eligible proposals from over 50 countries, which were voted on by an international panel of 100 jurors. Members of the jury were asked to read 50 anonymous proposals and nearly 3,200 votes were cast to determine the winning…

How Well do you Perceive Color? 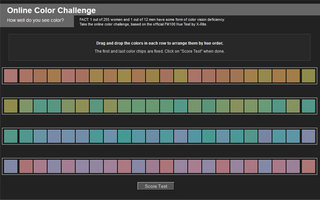 - - Did you now that one out of 255 women suffer from mild color blindness, and an incredible one in 12 men have some form of color vision deficiency! Take this… 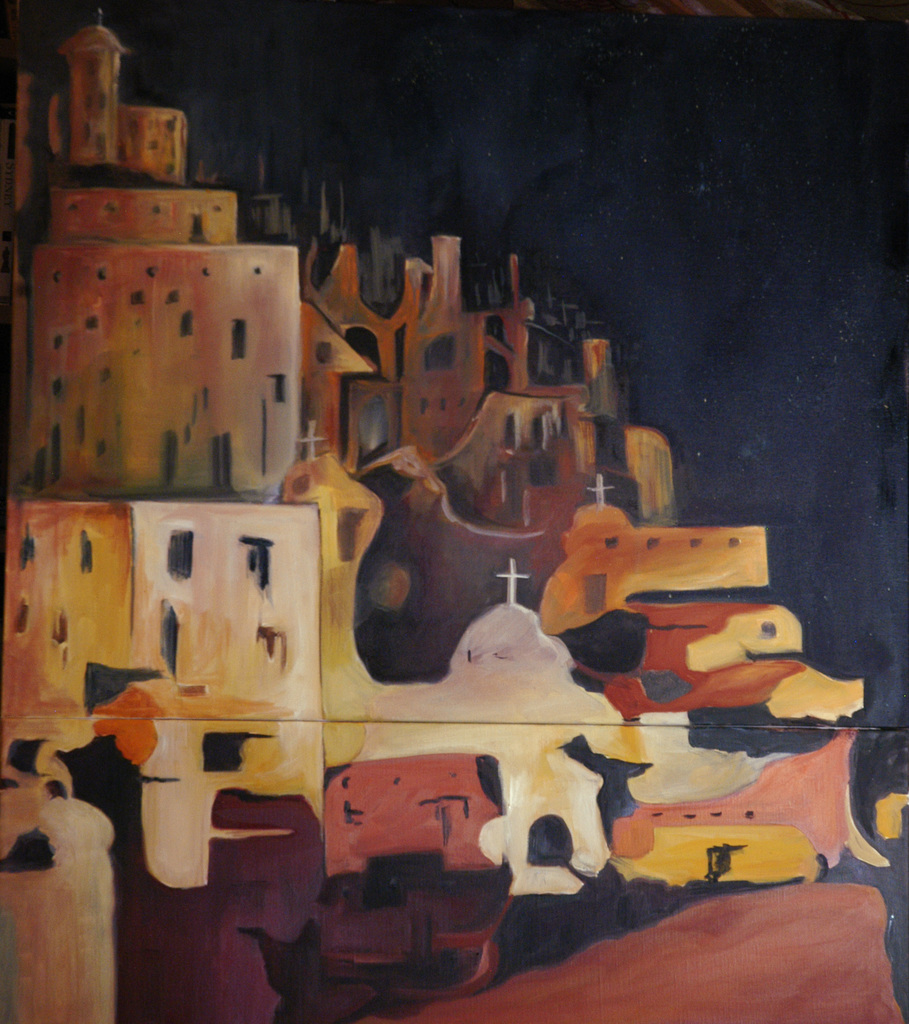 I just completed my "Antiquities" dipditch.  It is an abstraction of an ancient city on a hillside.  This painting is done in oils because I wanted to work with earth tones and blends and I do that best in oils.

I am a retired engineer and quite truthfully, I don't have a big imagination.  I see things very realisticly and have a very difficult time…

My Bio
As far back as I can remember, all I ever wanted to be was an artist. From the age of 5, if my mother wanted to keep me occupied and out of mischief, all she had to do was give me a pencil and paper, and I would draw for hours.
When I was 14 I had an accident while riding my bike, and broke my leg. It was serious enough that I had to be put in a body cast which landed me in bed for almost 8 months. During that time the Board of Ed sent me home tutors so that I wouldn't miss…

My Artwork Featured on A2a

I am new to the site and just  had a email to say I am featured with the Crosby statue abstract painting, the Crosby statue's have inspired me to do many landscape paintings of them and am going to paint another very soon with all of them on, which will be my final one in that series, I am very honored to get featured for my work, Thank you.…

I have more works posted at www.shelleyhull.com

I have always had a creative mind when I draw a certain type of object. My inspiration comes from books I have read,mystery movies, dreams, and the dark creative side of my brain. I like the idea of using graphite when I draw, and the major use of contrasting. I am also inspired by a famous artist, Samuel Gammell.

With a group of artists we go out every week for painting on the beautiful island Curacao. And every week we find a nice spot which gets us inspired!!! I grew up in rural New York, near the St. Lawrence River. My family used wood stoves as our main source of heat, within a 150 year old uninsulated farm house. My little brother and I used a chainsaw to cut-up logs, blocked wood with a 12 lb. steel splitting maul, and hauled it into the house—all part of a normal winter. My Dad exemplifies the rugged man—a bridge construction worker, welder, mechanic, hunter,…

Looking for some place in U.S. That does good quality Giclee and prints cheap....Any help would be greatful.....!

Looking for some place in U.S. That does good quality Giclee and prints cheap....Any help would be greatful.....!

Every good artist needs a good camera...! I have the perfect camera its small but it takes great pic's perfect for that I wish I had my camera with me moments. It's a fuji film 8.2 maga pixels. I just put it on Auto and shoot. Perfect for those great Idea's for my paintings.........

Well here it is... my first post. For those of you that are interested i will be putting up some examples of my work for you to have a browse through. I have also very recently finished (almost) my official website so please pay me a visit at www.markpbg.com. Any feedback is greatly appreciated. Don't forget to sign up to my mailing list for all the latest news about upcoming events etc... just visit the 'Contact' and fill in the simple form…

Capturing Light as an Art

I've had a fascination with colored light ever since I was tiny. Growing up in England we had delicious chocolates called Quality Street. Each one was individually wrapped, often in brightly colored cellophane. I used to have so much fun holding those up to my eye. That fascination has now become a passion. I photograph static points of colored light. My intention is to illustrate light in a form it's not seen by the human eye. To show others what it can be. To freeze a few 3D moments in…

Dear Artists - Remember that your content is routinely submitted to search engines by us and currently is / or shortly will become available across most international networks and search results. Google your name and see if it is already listed!  (You of course always have the…

International Deadline: Ongoing - Attention A2a Artists. In addition to our other artist marketing and promotion services, we feature Artists2artists members on the front page and across the A2a network, as well as on the ArtDeadline.Com public website and other high exposure spaces. This includes links to the artist bio/article and their personal A2a website.…

This November I will be exhibiting my recent work in London at the Wimbledon Art Studios, starting on the 24th of November. I recently have had a studio built there which is part of an art community and it houses around 200 artists. This is very exciting and before I have even moved in I received a phone call to say a client was wanting to purchase a painting.

Also this week i am attending a workshop with the anatomy expert Scott Easton, who has recently finished work on the…